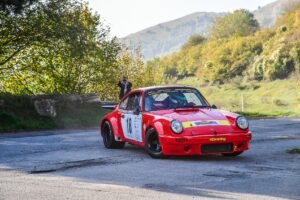 SANREMO (IM), Oct. 14 – An Italian monologue in the first leg of the 37th Sanremo Historic Rally with Lucio Da Zanche, co-driven by Daniele De Luis in the Porsche Carrera RS of Fourth Group, who finished at the head of the first day of the West Ligurian Coast race, valid for the Italian Historic Car Rally Championship and European Historic Rally Championship, winning five of the six special stages on the program confirming his empathy for the Sanremo race, which he has won four other times in the past. The last one last year. In second position at 22″1 from the Valtellina driver, the Sicilian Angelo Lombardo, with Roberto Consiglio at the pace notes on the Porsche Carrera RS of Second Grouping, poised between running a waiting race (he only needs to see the finish line to be overall Italian champion, which would be added to the success already achieved in the Second Grouping) and following his attacking nature especially in a race he particularly loves. After the first five stages, conducted at a fast pace, without risks, especially on the deadly Teglia, ending the first lap on the specials in fifth position overall, in the second round of tests Lombardo went wild, becoming Da Zanche’s most concrete alternative, imposing himself authoritatively in the last special.

Third place at 2’13″7 from the record for the Finns Villi Silvasti-Risto Pietiläinen, with the splendid Lancia 037 started with the number 1 on the specials, second force in the field for the first half of the race, then suffering the vehement comeback of Angelo Lombardo in the repetition of the tests. He was followed by a concrete Oreste Pasetto who shared his Porsche 911 SC with Michela Graziato just 14″8 from Villasti, then the Ford Escort RS of Enrico Volpato-Flavio Zanella and Ermanno Sordi-Maurizio Barone in the Porsche 911 SCR to close an all-Italian sextina.

In eighth place overall just 5″2 from the Ford Sierra Cosworth of Matts Myrsell-Esko Juntilla was the Porsche 911 of local driver Maurizio Pagella with Francesco Zambelli at the notes, who consistently traveled among the top 10 in the overall standings. Of the 64 crews that started at 8:30 a.m. this morning, 45 finished the first stage. Among those who retired were Enrico Brazzoli-Manuel Fenoli, who disastrously flipped their Porsche 911 SC in the San Bernardo di Conio turnaround of the first special stage. The race will restart Saturday, Oct. 15, at 8:15 a.m. and after five more special stages will return to San Remo to award all competitors who finished the rally at 2:30 p.m. 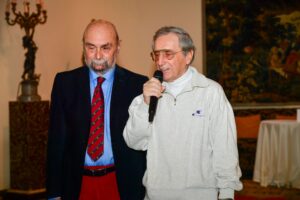 A plaque for Amilcare Ballestrieri, winner of the 1972 Rally Sanremo.  Fifty years have passed, but the victory of San Remo driver Amilcare Ballestrieri, flanked by Arnaldo Bernacchini in a Fulvia HF, has not been forgotten. Amilcare and Arnaldo will be celebrated at 2 p.m. on Saturday, Oct. 15, on the arrival platform of the Sanremo Rally Storico, and celebrating them will be Amilcare’s historic navigators, starting with Daniele Audetto, Silvio Maiga and Piero Sodano, as well as, of course, Sergio Maiga, current organizer of the Sanremo and Ballestrieri’s navigator in the first half of the 1970s.

All necessary information for competitors and spectators can be found on the website www.rallyesanremo.it with all entry forms and declarations of compliance, as well as all race news, including programs and time and distance tables. The race’s official Facebook page is also active at: https://www.facebook.com/RallyeSanremoOfficial/ 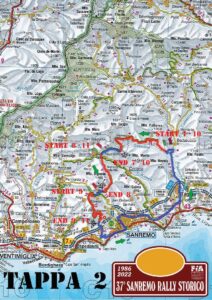